And he said to him, “You have given the right answer; do this, and you will live.” But wanting to justify himself, he asked Jesus, “And who is my neighbor?”

Jesus replied, “A man was going down from Jerusalem to Jericho, and fell into the hands of robbers, who stripped him, beat him, and went away, leaving him half dead. Now by chance a priest was going down that road; and when he saw him, he passed by on the other side. So likewise a Levite, when he came to the place and saw him, passed by on the other side.

But a Samaritan while traveling came near him; and when he saw him, he was moved with pity. He went to him and bandaged his wounds, having poured oil and wine on them. Then he put him on his own animal, brought him to an inn, and took care of him. The next day he took out two denarii, gave them to the innkeeper, and said, ‘Take care of him; and when I come back, I will repay you whatever more you spend.’

Which of these three, do you think, was a neighbor to the man who fell into the hands of the robbers?” He said, “The one who showed him mercy.” Jesus said to him, “Go and do likewise.”

Sermon
Pastor Stevensen began his sermon on the Good Samaritan with a story about a Chicago lawyer outside on a city sidewalk having a heart attack. A black woman hails a cab, got him into it, and handed the driver some cash, thereby saving the lawyer’s life. The honor that anyone would feel toward the woman is an indication of the power of this week’s parable. A priest went by and a Levite went by. There is no surprise there. The surprise is that the man who stopped was not even an Israelite, but a Samaritan. The Israelites and the Samaritans were once one people but now the Samaritans were despised. The Samaritan is the hero of the story. Is that it? The New Testament is about Jesus Christ. We want to be good Samaritans, but are we? Does the Samaritan represent Jesus? Jesus may heal the man but pay the price. As Gregory the Great once wrote, the more one reads the scriptures the more one understands their meaning. As the victim in the parable, we could become stuck on the road. If we think about it, it may be Jesus who is the Good Samaritan. 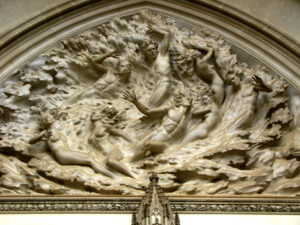