Matthew 22:15-22
Then the Pharisees went and plotted to entrap Jesus in what he said. So they sent their disciples to him, along with the Herodians, saying, “Teacher, we know that you are sincere, and teach the way of God in accordance with truth, and show deference to no one; for you do not regard people with partiality. Tell us, then, what you think. Is it lawful to pay taxes to the emperor, or not?”

But Jesus, aware of their malice, said, “Why are you putting me to the test, you hypocrites? Show me the coin used for the tax.” And they brought him a denarius. Then he said to them, “Whose head is this, and whose title?” They answered, “The emperor’s.”

A sermon on the gospel reading

This Sunday Pastor Stevensen told us that in 6 A.D. Jewish leaders went to Rome and made a deal with the Romans. There it was agreed that the Roman coin would not be used in Judea and that the Jews would be taxed, the taxes to be used to reconstruct the Jewish temple, which would be used to worship Caesar. The Pharisees show a Roman coin to Jesus and try to corner Him by asking “Is it lawful to pay taxes to the emperor or not?” With His answer “Give therefore to the emperor the things that are the emperor’s, and to God the things that are God’s,” Jesus sidesteps a trap. Before the Roman conquest, Israel had long had both a king and a prophet. Government and religious authorities were separated, unlike the Arabic Muslims, and were accepted by the people. With his wise answer Jesus offered a cornerstone to Christianity, a blueprint for the future. And not only authority was involved but also image. The coin bears Caesar’s image, but there is also a hidden image. In Genesis “Man is Made in God’s Image.” We are the image of God. He has complete claim on all people. Jesus made an assertion and the Pharisees walked away. We must stay and accept God’s claim on ourselves. 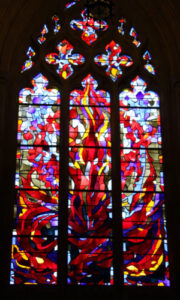