First reading from Jeremiah:
Am I a God near by, says the LORD, and not a God far off? Who can hide in secret places so that I cannot see them? says the LORD. Do I not fill heaven and earth? says the LORD. I have heard what the prophets have said who prophesy lies in my name, saying, “I have dreamed, I have dreamed!” How long? Will the hearts of the prophets ever turn back–those who prophesy lies, and who prophesy the deceit of their own heart? They plan to make my people forget my name by their dreams that they tell one another, just as their ancestors forgot my name for Baal. Let the prophet who has a dream tell the dream, but let the one who has my word speak my word faithfully. What has straw in common with wheat? says the LORD. Is not my word like fire, says the LORD, and like a hammer that breaks a rock in pieces?

The Psalm 82:
God has taken his place in the divine council; in the midst of the gods he holds judgment:
“How long will you judge unjustly and show partiality to the wicked? Selah

Give justice to the weak and the orphan; maintain the right of the lowly and the destitute.
Rescue the weak and the needy; deliver them from the hand of the wicked.” They have neither knowledge nor understanding, they walk around in darkness; all the foundations of the earth are shaken.

I say, “You are gods, children of the Most High, all of you; nevertheless, you shall die like mortals, and fall like any prince.”
Rise up, O God, judge the earth; for all the nations belong to you!

The gospel from Luke:
Jesus said “I came to bring fire to the earth, and how I wish it were already kindled! I have a baptism with which to be baptized, and what stress I am under until it is completed!

He also said to the crowds, “When you see a cloud rising in the west, you immediately say, ‘It is going to rain’; and so it happens. And when you see the south wind blowing, you say, ‘There will be scorching heat’; and it happens.

Sermon:
Jeremiah is harsh at the end, where God askes “Is not my word like fire?”. The Psalm continues about the coming Judgment and the prophets who saw it coming. Pastor Stevensen begins with our natural impulses and tendencies and that a theme of the Judgment is unpopular. Nobody wants judgment on friends nor on themselves. Jesus said “I have baptism of firel” He sets off a chain of events and is caught up in these events. He would suffer. He knows that He is innocent, but He joins with the guilty and accepts the punishment. At great cost to himself Christ asked us also to be children of God. 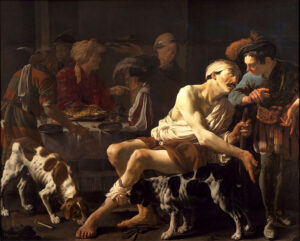